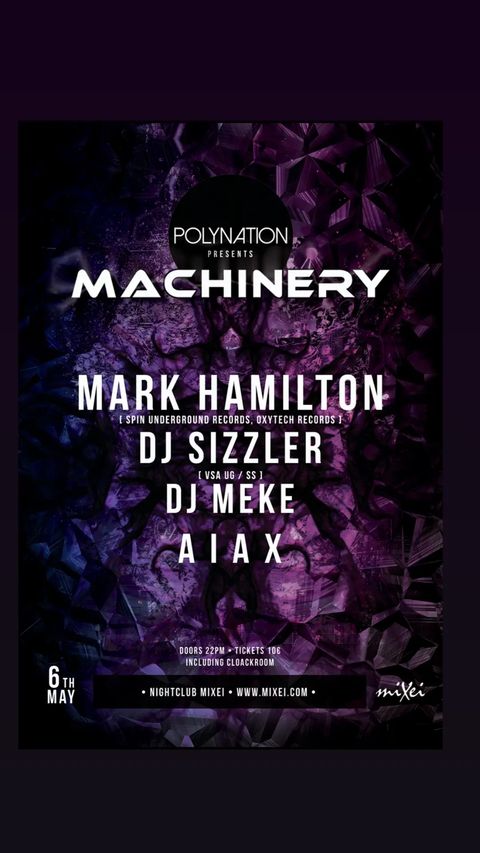 MARK HAMILTON got a DJ gig finally and this was a long waiting under Covid-19 reasons.

What kind of DJ set he come to play:

After 9 years and wrecking havoc on countless dancefloors and festivals across the globe, Filteria is back for his 5th studio album called “Live With the Lag”! and what might be his best album to date.

Instead of squashing the audience end to end, Jannis Tzikas takes you on the hop in a dazzling 9-track experience where he shows he can take you anywhere through his melodic mastery!

“Live With the Lag” was worth the wait, Filteria didn’t make any compromise and remains at the apex of the modern Goa Trance genre! Get the extracts on the release page !

RayD8 lands on InfraRed with a mighty debut outing in the form of ‘Kracken’.

A beast when unleashed on the dancefloor, ‘Kracken’ is a sure fire club smash in the making. Peak time euphoric stabs, an epic melody, copious amounts of energy and a whole lot more.

Reflek x Cammie Robinson – Read My Mind [Be Yourself Music]

The ultimate exhibition of bittersweet dance, vocalist Cammie Robinson attempts to work out the innermost thoughts of Italian producer Reflek. Out of pensive guitar strums moodily staring from the shore, and lyrics tinged with pain and trying not to let the situation slip through its fingers, the innocence of their Be Yourself Music collaboration ‘Read My Mind’ surprises with its weighty pads and relatively bouncy outlook. From these longing looks and emotions that readily flow while keeping their composure, comes a chorus guaranteed to be chanted back by audiences at volume.

We proudly present you a brand new Art Frequency tune! Starting off strong with a high energy mid-intro, followed by an a-typical yet original break and finishes with a bang. 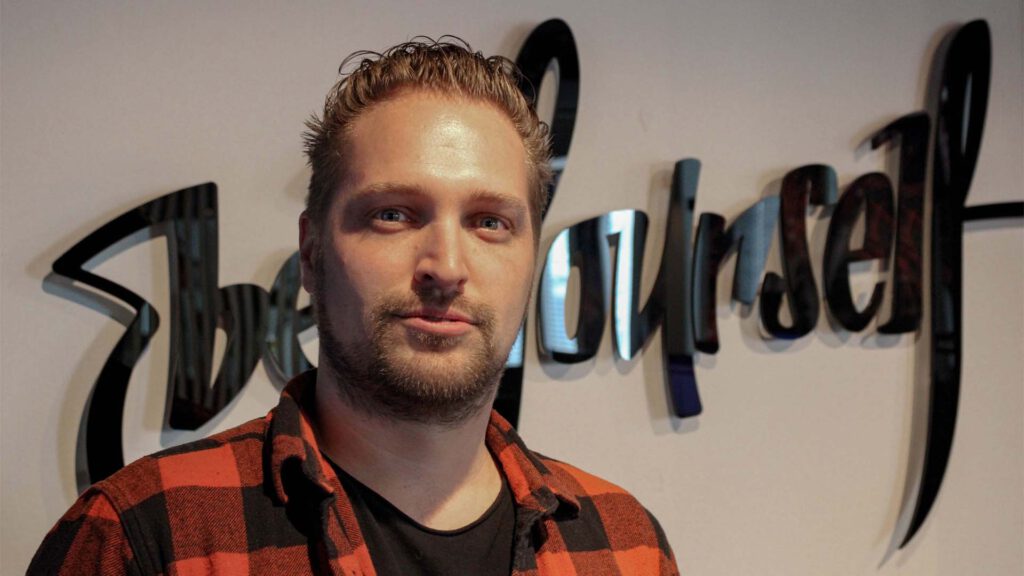 “I don’t believe in the concept of luck, I do however believe in setting out your own vision and route” says Kay Wilder, doing precisely that as he dynamically dissects his way through the Dutch dance scene with the rest of the world waiting. Setting out a style mixing up breakneck intensity and calming moments of clarity, Kay Wilder arrives at High Contrast Recordings with major moments for Armada and Ministry of Sound prominent in his discography, spread around the running of his own Epic247 Recordings imprint.

A top 100-polling spinner, Wilder – or WLDR. depending on which method of dancefloor domination he chooses – has cranked the volume through Europe and Asia as A State of Trance showcase performer, and made the Afghan desert his own across 180 minutes of unifying sonic showmanship. Receiving support from industry leading tastemakers, like Paul van Dyk, Ruben de Ronde, Lange, Above & Beyond, Paul Oakenfold, Rank 1 and Marco V shows his regard in trance circles, and The Netherlands’ massive free Dancetour festival selected Wilder’s ‘Bringing People Together’ as its headline call to arms.

His skill for creating vibes and building atmospheres while throwing you off guard as Kay build his tracks with competitive contrasts, delivering its first epic installment for High Contrast, called ‘Creatures of the Night’, which hits hard as a diamond while fired by compassion.

“I don’t believe in the concept of luck, I do however believe in setting out your own vision and route”

Be Yourself Music, welcomes Wilder to the crucible. “Kay has got everything going for him right now and has been a force to be reckoned with for several years. You know he’s going to provide something for everyone – for the heart and for the feet – and that makes him an excellent addition to the team”. The call of the Wilder is growing ever louder – look out for some major noise to be made this year, kicking with a capital Kay.

Kay Wilder: “Ever since the start of my career the High Contrast imprint has played a huge part in my musical inspiration and creative development. Being home of some of my biggest influencers in the scene. While I was already dj-ing on the High Contrast label nights in the early days, now, probably somewhat overdue, making my first appearance on the label showcasing my high energy sounds fit for the bigger stages and uplifting moments in life. For me it’s a personal journey of which I’m excited to join forces with the High Contrast / Be Yourself Music team. Capturing my creative outlets from the recent years, now seeing the light of day. Aiming to return the big melodics and trance sound to its roots, stirring the melting pot combining several influences in the process, while bringing the (high) contrast back in the trance genre.“

Pre-save his first release ‘Creatures of the Night’ here

Het bericht Welcome to the Be Yourself family: Kay Wilder verscheen eerst op Be Yourself Music.

Kataploks returns to the Infrasonic ranks with a brand new E.P on our Interstate imprint.

Kicking off proceedings with ‘Amethyst’, this twisted, techy number sets the tone for this mighty E.P from Kataploks. Packed full of energy, a killer hook and plenty of hands in the air moments.

The second offering on the E.P is ‘Lazurite’, another jaw dropping demonstration from this fine, rising talent.

Do not miss these!

We are more than proud to welcome Sefa to our family! This musical mastermind is without a doubt one of the rising stars within the Hard Dance genre. He started producing at the age of 12 and released multiple tracks on the label of Dr. Peacock in the following years. When he was 16, he made his debut at Defqon.1 and from that moment Sefa went sky high. Stages had to be closed down at Harmony of Hardcore and Dominator due to the crowds, he produced anthems for Defqon.1 and Qlimax, collaborated with the biggest artists, and celebrated his 19th birthday by closing down the Defqon.1 at the Mainstage in 2019!

2022 marks a new chapter in his career with his own label and a brand new album. The first releases on his label Sefa Music are already here. The first track ‘Infinity’ is a collab with D-Block & S-te-Fan and the second release is a remix of monster hit ‘Nobody Said It Was Easy’ by Evil Activities.

Make sure to follow his and our channels because this is only the beginning of something big!

Het bericht Welcome to the Be Yourself family: Sefa verscheen eerst op Be Yourself Music.

Melsen – Ain’t Real [Be Yourself Music]

Thumping piano-driven, bar and ballroom-blitzing beats, and a stiletto-heeled vocal, equal parts femininity and empowerment and 100% not taking any nonsense – it’s a match made in heaven, or your money back. ‘Ain’t Real’ is another Melsen special for Be Yourself Music following his hype run in 2021, a house music buccaneer grabbing you from the very first moment he gets busy on the keys and his muse clears her throat. The funkiest dancefloor dust-up you can joyfully thrust and sing along to this year – Melsen remains the man to watch.

BURNR – Shake It In The Mirror [Be Yourself Music]

The Netherlands producer perfects his Polaroid picture party look with funky, bumpy house unlocking a series of frenzied synth shots to the hip as he goes. Rap lyrics encouraging booty bounce add sauce to the ‘Shake’, but the ‘bout-to-blow BURNR refuses to settle into the straight up groove; mega builds and a breakdown of white hot keys take the track down a left turn, so the already sweaty, hoover-enhanced atmosphere becomes one that’ll bake your brain as well as your body. Housework that’ll hurt ‘em.

Brennan Heart proudly presents you the newest signing on his I AM HARDSTYLE Amplify imprint: Hypnose. With a great track record already, they are starting off their IAH journey with their debut single Don’t Wanna. Showcasing their developed producing skills combining trancy leads with a great drive.

With Thomas Newson at the controls, what you waiting for? Punching in a key sequence that brings to mind a couple of classics in Alcatraz’ ‘Give Me Luv’ and Ruff Driverz’ ‘Dreaming’, Newson aims for the sunshine but makes sure his beats are hotly tipped as they drive hard into the sand. A vocal snippet imagining house music as a hoedown to yeehaw to, ‘C’Mon Baby’ is a pumping groover with plenty of old skool big room dynamic, all about feeling good without giving up a forthright thrust.

The Story of Tomorrow is about us, the fanatic music lovers that live the ‘hardstyle’ lives with dedication and passion. Together as a family we embark on a journey to a new and yet to be discovered world. We all live towards tomorrow and the people that accompany us on our journey ARE the story of tomorrow.

Listen to the highly anticipated new release on Derailed Traxx from rising star Nick Novity. Inside My Head shows that Nick Novity found his signature sound and is ready to take over the world!

The search for UFO activity finds Marco V, Orbital-style headset on blast, sending pounding beats into the wild and low-slung rhythms past the speed limit, with a top line of skittering, scurrying keys belonging to something tentacled, rhythmically digging into the track’s surface. This ‘ALI/ENS’ race is an intelligent one, The Netherlands superstar teasing a potentially climactic breakdown, but deciding that the best form of defence is attack: kick drums continue their onslaught, and his rhythms-as-drum-rolls fascinate and disorientate in equal measure. Dark and direct tech-house tactics that spell danger.

The highly anticipated new Sound Rush tune is finally here! Mantra is Sound Rush’s first release of 2022 on the Art Of Creation imprint and it makes you crave for a summer filled with outdoor festivals and good weather!

JGSW – This Is Our Time [Eternity]

This masterpiece is JGSW’s brand new single on Art Of Creation’s new imprint: Eternity. This tune is made for the dancefloors with a trailblazing mid-intro followed by some dark and dramatic vocals.